Report of stall at Greenbelt 2014

David Beattie who helped on the CEL/A Rocha stall at Greenbelt in August 2014 writes: 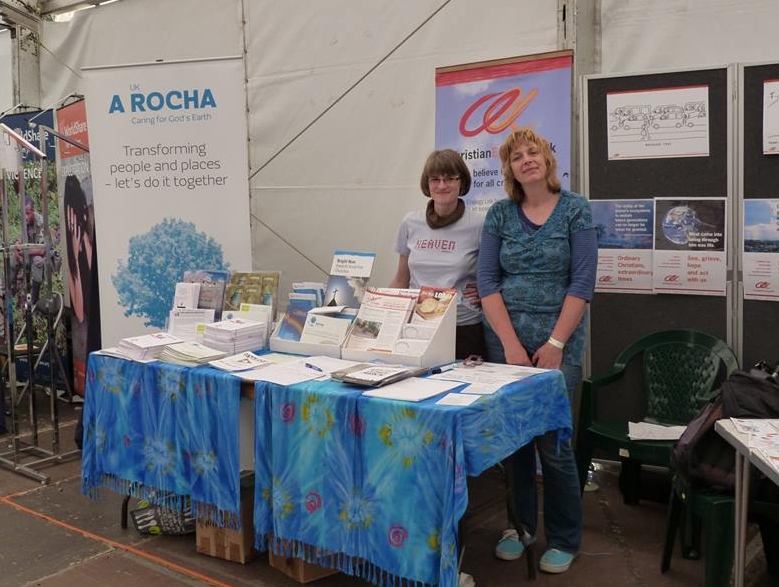 I looked forward to Green belt this year with a mix of excitement and uncertainty.

I always do enjoy the Festival but this year we gathered in a new location. There was much more walking to do, but that meant you were not going to be disturbed by any vehicles.

I had travelled part the way by train and then got a lift in a friend’s car. Once tents were pitched we tried to learn the layout. You get some idea in the photo of the distance we had to walk.

CEL and A Rocha shared a stand in G-Source, with each of us emphasising the green part of being a disciple of Jesus. Most of my time was spent either on the stand or supporting the two Ruths ( Valerio and Jarman) as they did their various slots.

In Ruth Jarman’s case that also included busking (see below) .

I also made sure I went to the seminar about Palm Oil hosted by Traidcraft. You must check out their new cleaning products.

Michael Northcott was his usual challenging self in both the discussions I joined.

The only musician I heard was Jahmene Douglas. I’d never heard of him before, but his voice was amazing.

I also went on a morning stroll with some folk from a Forest Church. They shared how you could make string or even clothing from nettles, as well as make nettle soup or wine.

Communion with thousands of others is always special but when then person leading is the daughter of Desmond Tutu it makes it even more so.

Being a birder, one thing I noticed was a stock dove slowly circling the congregation as we gathered, then perching on a gantry as we worshipped. It was as though the Holy Spirit was ensuring everything went in a way to glorify Father God.

The final day was a bit of a washout, but not in the Festival content. It reminded me of a Mahalia Jackson song, “ Didn’t it rain Children”. Dampened physically but not in spirit, we still had a great time on the stall. I had two great conversations with some folk. One said “ I’m a trained ecologist who wants to help but I’m not sure I’m a Christian” The other asked “ What has God got to do with the environment?”  I can’t remember what I said but they both went away happy. Already I am looking forward to next year.

Comments on "Report of stall at Greenbelt 2014"

Add your own comment to "Report of stall at Greenbelt 2014"