Home › Blog list › CEL & Enough Food for Everyone If..

CEL & Enough Food for Everyone If.. 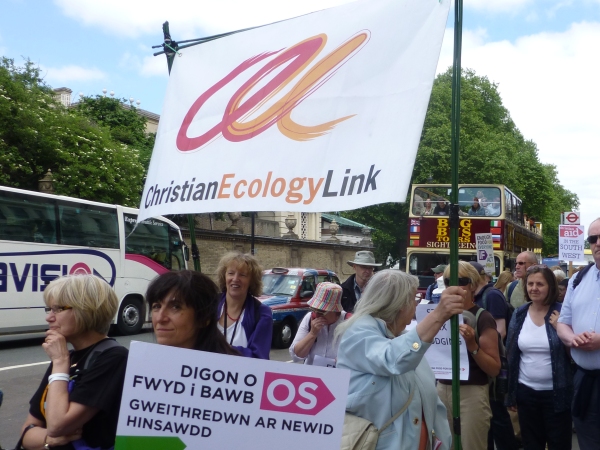 CEL and the BIG IF

Judith Allinson reflects on some events or the day and gives THANKS to the many people who helped her in her journey, and who helped others:- From the thousands of people who worked as stewards and organisers, to Maggie McSherry who organised the train tickets which enabled people to come from Lancaster, to CEL members Sylvia and Jean who helped carry  the banner.   The following day she writes:

This morning I made a little display of pictures and put it in my church: saying:

We planted 250,000 plastic flowers at Hyde Park, London,  the petals to represent 2 million children who die of hunger each year.

But there is enough food for everyone if:

Here (in the foyer) is a flower I brought back.

Tens of thousands of people converged on London for this event: there must be tens of thousands of stories. I share some of my pictures so that people in CEL and other readers of this page can feel part of it.  So here is an account of the three days – yes a day to prepare and a day to write up!

I had been sent the white plastic CEL Banner the previous week. It was up to me to arrange poles – that could be carried on a train.  So the day before I had bought some green plastic coated long bamboo canes and some gaffer (duck) tape. I worked out how to make a banner holder so that the banner would be held  hanging outstretched  and above the heads of the crowd. I disassembled it and put it with the banner ready to take in the morning.

I reached Lancaster and travelled  down by train with a group from  Lancaster Faith and Justice.  One lady uses a foldable wheel chair and I went with several others with her in a taxi to Methodist Central Hall… sight seeing en route, and keen to get there as soon after the doors opened as possible. 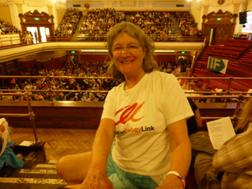 My co-banner-bearer,  Sylvia  had come down via Leeds – and had found a good seat on the ground floor – I was upstairs. Would we manage to meet up? We texted each other.

In the hour before the service, as the hall filled, a lively black band played and we sang reggae songs such as “Let’s get together”

The Service was compered by Ruth Valerio of A Rocha –

General Secretary of the Methodist Church Martyn Atkins gave a short welcome explaining what other important people had spoken here including Gandhi.

Ruth “interviewed” a lady from the Congo – who said that many more people died of malnutrition than were killed in the war.

Ruth asked us to talk with our neighbour for 3 minutes and say something we had already done to improve the world hunger situation and something we would resolve to do.  The gentleman next to me told me about the Empty Plate project – never to put more food on your plate than you can eat. – so thus not to waste food. I said I would try to eat more of a vegan diet. (But no way entirely)

The canes I bought and method I used for holding the banner worked.  I met Sylvia, we let the crowds leave and we spread the canes out on the hall floor and assembled it. The banner was carried high and seen from afar –

Jean Wright, a Methodist from Devon came to help carry it. And here you see us with Jerry Barr from near Cheltenham

The pole construction withstood 2 hours of walk through windy episodes, under trees with low branches and past other street furniture such as spikey railings above tall royal walls.  Big thanks to long suffering CEL members of Sylvia Walker and Jean Wright – who helped carry it.

Lots of people looked at it –I heard them saying “Christian Ecology Link, what is that?” 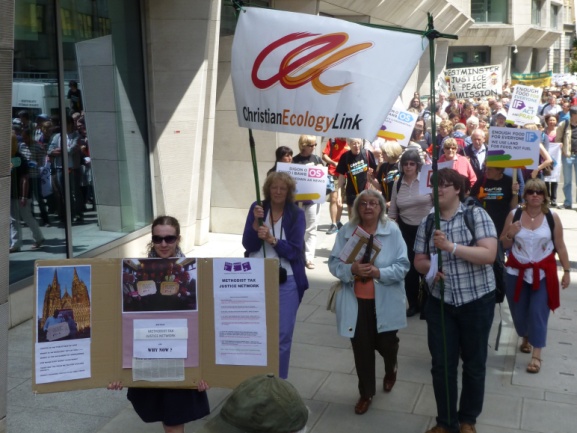 Walking in front of us was the “Methodist Tax Justice Network” – email mtjncoordinator@gmail.com for information. . One of them seen here on the right nobly carrying our banner whilst I took photographs and the second carrying their display now all by herself.

And shortly in front of them were Ellen Teague and others from Pax Christi.

Here are pictures of us en route.

Once in Hyde Park, Sylvia, Jean and I split up. Having temporarily ditched the green bamboo canes in some bushes, I eventually made contact with, and found (by arrangement) my Nigerian friend of the 1970s (when we were both at university) who was visiting her family in London . She her son had come in to the Park to visit me. We walked together and planted flowers at the plastic flower site. 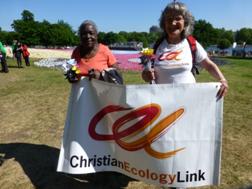 This was A  LONG WAY from the screens and stage, on the opposite side of the Serpentine..

They were giving people spare plastic flowers – A girl said they had been planning them since Thursday – and she was glad to give away some of the last ones now.. I thought “I will take some back for my church and  for other people in our group on the train- so took about ten of different colours.”

I said farewell to my Nigerian friend.  I realised I would have missed most of the speakers. I wondered  if there would be time to go and see the screens, or buy some food. There wasn’t.  I photographed the screens in the far distance. I retrieved my poles from the bushes and made a valiant effort to cut and disentangle the very sticky black tape and string, and tied them into a sheath of green canes again.

“Hello” a young man said, on seeing my CEL T-shirt. He was handing out leaflets encouraging people to be vegan. “Give my greetings to Ruth”.  (I pass them on to you, Ruth Jarman).

I photographed some seeds/fruit of cotton (on display by and organic cotton shop). .. and pocketed a couple of white fluffy balls. . they do look a bit like cotton-grass which is adorning  our bogs at the moment.

I failed to get food and walked with many others reaching the road at 10 to 5 – (planning to catch the 5.30 train at Euston)  I caught a taxi (rather than braving the tube with my sheath of canes) and the taxi driver manoeuvred the back streets and incessant red traffic lights  of the 5pm rush hour to get me to the station on time – what a relief!

I asked people what they had got out of the day:

“I got lost on the tube so arrived late so could not get into the Hall or Overflow rooms.  But I was one of the first people on the field at Hyde Park and was grabbed  by someone to be interviewed. Then I had a chat with someone on Muslim Aid Stall – and was asked to be photographed with one of them. I had some good discussion with them.”

“The amount of people together for one purpose”

“Christian, Moslem and Secular groups together for one cause”

Once back home, I phoned Sylvia at 9.30pm .. to be told that she had only got as far as Doncaster.

Next day she told me more:-

Sylvia’s adventures started with a rest on the way to the railway station in a triangular piece of grass near Hyde Park tube station – People were waiting to watch something .. which turned out to be . A Nudist cycle race.   This duly arrived with a host of naked men on cycles. – How do they get away with it in the middle of London?

She caught the 6pm train.. but due to engineering works and a fatality on the line, did not arrive home till midnight.

But she had enjoyed the day

Unlike me, she had made it to the stage, and had enjoyed watching the speakers.  Everyone had been sitting on the grass watching. But some people at the front got up, then the row behind who could not see and so on till everyone had got up and Sylvia could not see. So she watched it on the screen.

No one had said anything terribly new (to Sylvia), but it was good seeing famous people such as Danny Boyle and Bill Gates involved in the issues

She said Satish Kumar was the most passionate – which was good.

“If I came to s similar event, I would make my own poster – with a message on, as well as who you are. I liked the posters which said: “I am here for the 1 in 8”.

The news on Television both BBC and ITV was good. – it showed our protest and then switched to David Cameron.

The most encouraging thing was it was good to be part of something bigger – You do your own little bit in your own corner and it is good to meet up with other people who are also doing their own thing in their corner.  To see young people caring is hugely reassuring. – e.g. it was good seeing the young people with their tax justice poster in front of us.”

Next job – to make a press release for my local paper.

Comments on "CEL & Enough Food for Everyone If.."

What a wonderful day it was - thank you for sharing all the photos and comment. Very sorry not to have been able to be there - hopefully the next time.

Add your own comment to "CEL & Enough Food for Everyone If.."