Some Passion from Teague 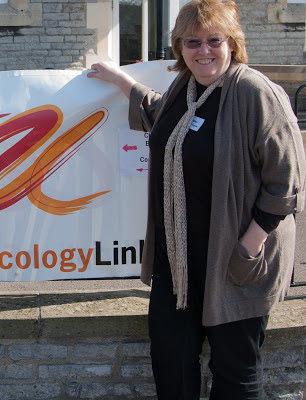 Catholic writer and journalist Ellen Teague last night came from London to meet a couple of dozen of us at our final Cheltenham Christian Ecology Link gathering for 2012: her theme, on which she spoke with some passion, was “Christian ecology?” An imperative for our times!

Ellen laid out her credentials with the aid of slides she had taken whilst teaching in Nigeria, working for CAFOD during the period of the Ethiopian famine and in more recent times advocating on the climate change front with the Columban Missionaries.

During her 30 or so years’ involvement in campaigns on behalf of church organisations, Ellen said she had witnessed a growing awareness that development and the environment were connected. But it was not just those living now on the margin, with whom Christians should be showing solidarity: the problem was that so many are only getting through today by compromising tomorrow. What happens to those dependent on firewood when all the trees have been cut down?

And yet how little do we hear in our media about modern Rainforest martyrs, Chico Mendez and Sister Dorothy Stang, murdered in Brazil! Or the priests and picketing people of Mindanao in the Philippines, risking their lives to celebrate mass together on the route heavy vehicles were using to open up new mines.

Father Sean McDonagh has described the eucharist as the sacrament of ecology: how can Christians preach the good news of life in abundance, without being concerned for the disappearance of the glaciers in the Andes, the melting water of which is vital for the citizens of Lima?

As a Catholic, Ellen had long wondered why her church was so slow to embrace initiatives which were fully in accord with Catholic Social Teaching, such as Creation Time – in recent years celebrated by other Christians throughout Europe each Autumn. One reason was the church’s anthropocentric vision. Humans are effectively edging others off the planet. When considering the plight of the unborn, well, the church clearly sees abortion as a sin. But how do we describe a tragedy such as Bhopal? Someone’s sin? No, our reaction is more like, “A pity!” We seem to lack any moral code to cope with biocide: it’s as if there’s a failure of communication between religion and science.

And in a clergy-centred church, what matters greatly is the lead priests give within their parishes and dioceses: an enquiry was made to one of our leading seminaries, “How much time do you give to teaching creation theology to your candidates for the priesthood?” “Half a day,” came the reply. Not half a day a week, not half a day a month – half a day in the whole six-year course! But maybe the biggest obstacle we face is that priests don’t have children and grandchildren through whose eyes we (who do have them) can so easily see the future.

“The environment is not something you can dip into,” Ellen told us. What we have to develop is a sustained focus upon the meaning of God’s covenant with creation, outlined in the Book of Genesis. Quoting theologian Mary Grey, she urged us to become “a prophetic community working for our own transformation.” As people of faith, we need to step up.

Her words were, the audience agreed during the plenary session that followed Ellen’s talk, some challenge. We were able to reflect upon this at Compline, with which the evening ended. Deacon Robin had helpfully selected as our reading a passage from the first letter of Paul to the Thessalonians, concluding: “God has called you and he will not fail you.”

Copied with permission from: http://rangefree.blogspot.co.uk/

Next: Can you recognise these three common Churchyard Mosses?

Comments on "Christian ecology? – An imperative for our times! – Ellen Teague’s talk on 14 Dec 2012"

Add your own comment to "Christian ecology? – An imperative for our times! – Ellen Teague’s talk on 14 Dec 2012"