Have you noticed the spread of Klebsormidium crenulatum -“Nuisance Alga”?

Four years ago an algologist and lichenologist friend (Allan Pentecost)   showed me a filamentous green alga growing on a 50 year old wooden gate in Malhamdale.

“Look at it under a hand lens” he said . You will see it is filamentous. and indeed it was – it looked velvety.

Many algae are single celled organisims. But some grow in branched threads – as did this.

I photographed it, proud that here was an alga I could easily recognise and give a name to, and duly showed it to friends the following week when I led a walk on Algae and Llichens of Malhamdale

I looked it up on the Internet – most references were to it in Germany. But it said it was spreading in England. And that it was a sign of pollution by nitrogen compounds – nitrogen oxides from car fumes, and chemicals going onto the air from fertilizers and manure.

(Another day I am going to write a post celebrating the Haber Bosch Process – it is 100 years since the process of making artificial nitrogen fertilizer was developed to be run on an industrial scale – which has enabled our world population to increase, according to some by at least an extra 2 billion)

But back to the Klebsormidium

Since then I have noticed more and more each year.

Two years later Allan pointed it out to me on the walls of the sandstone of Malham Tarn House. “Nuisance Alga” he called it — I think because it grows on top of the lichens he would rather be studying.

I saw it on the millstone grit walls above Settle, whilst marshalling for the Settle Harriers Hill Race in 2011. and nearby whilst on a Craven Conservation Group walk in 2012 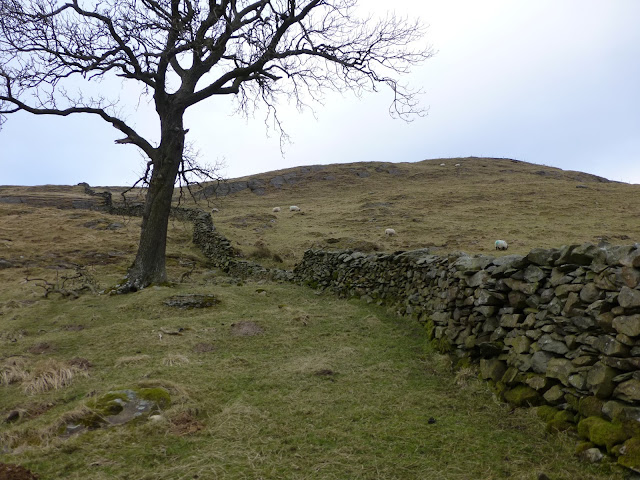 Both these places are high exposed places – where one would expect the air to be pure and clean. I can only presume that because they are windy places, that lots of air blown across from wherever ~(don’t want to say Lancashire)  even if the pollution is dilute, then a lot of air will eventually deposit a lot of nitrogen compounds.

Last year I found it in Wales, this year in Scotland.

A trip to Pen y Ghent – over 2000 ft above sea level this February to get the view above the fog .. revealed Klebsormidium at the very summit. 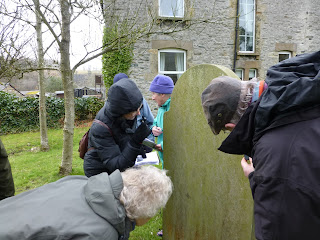 Here we are finding it on a slate gravestone at Ingleton

Today (Aug 24 2013)  it made a bright green backdrop to the blackberries I collected.

This is the wall where the brambles were. It was on a species rich country lane on millstone grit geology, in the Forest of Bowland.  But a glance through into the fields show they have been reseeded and well fertilized to give a second (or third?) crop of silage

Should we be worried? I am surprised it is not all over the internet, with tales of gloom.

But meanwhile I am delighted I can recognise the stuff, that I can get joy out of appreciating (some) different types of alga.

And can now (2015) recognise more types of lichen. Those Lichen species that like high nitrogen compounds are spreading too.. but that is for another post.

Two years later (Sept 2014) here are links to more places I have noticed it:-

Next: I am the vine -& naming local tree branches

It would be difficult to NOT find this around rural Devon. It seems to spread overnight sometimes. I live in N. Devon, and can only assume that with one or two exceptions spraying is a way of life on local holdings. I would dearly love to know how to expel it from my property and its 1 acre without causing more harm.