Home › Blog list › For the Love of… Climate Coalition launch

For the Love of… Climate Coalition launch 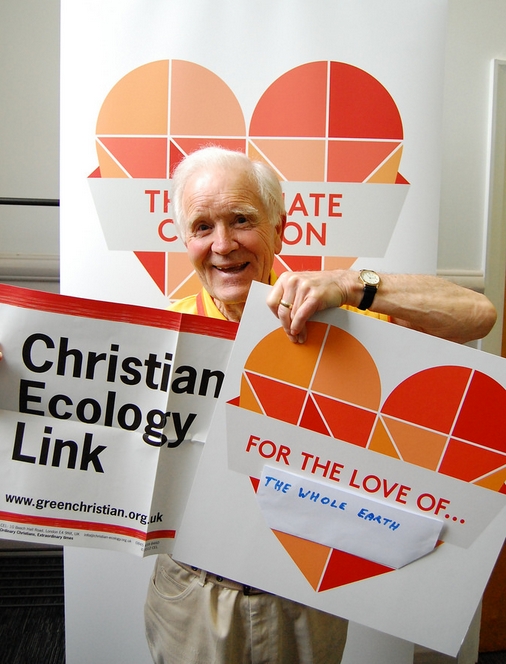 Our own intrepid Phil Kingston attended the Climate Coalition launch on Monday, and here is his report…

I attended this meeting on behalf of CEL. I enjoyed the friendly, well-organised and cooperative process and particularly appreciated the large number of younger people who were there. The main matters I want to pass on to CEL members are these:

1. The CCs logo is heart-shaped, which reflects the idea that climate change is affecting so much that each of us love. And The CC has as its theme an unfinished sentence which reads ‘For the love of …….. let’s tackle climate change’. We did a few exercises putting in the missing word or phrase and I included one for CEL which Jo had suggested, namely ‘the whole Earth’ – and if the photo comes out and I can include it with this, you will see how it was done. Also, we all took part in a brief video of the different organisations present forming into a heart and speaking the mantra with each of us putting in our chosen word or phrase at the appropriate moment. A good attempt to make harmony out of chaos? The video will give the answer.

2. Dom Goggins of CAFOD and Ruth Davis of Greenpeace gave a political update. A main point was the great importance of civil society developing its voice because it seems clear that politicians generally are following rather than leading with regard to ambition on climate change. I was interested and surprised to hear Ruth comment that although we may well regard the Coalition Govt as being low on ambition, it nonetheless plays a foremost role in Europe with regard to developments there.

She referred to an EU meeting in June regarding Energy Policy where it is essential that we let the Govt know the importance of pursuing energy efficiency (and presumably renewables). She also spoke about the UN meeting regarding the new framework for the Millennium Development Goals. Apparently David Cameron is keen on this being a meaningful meeting and it is therefore essential to convey to him that without a strong emphasis on climate change concerns, these social and health goals will be undermined.

3. A number of events during the next year are becoming markers for activity by the Coalition. They are:

b) September: The UN meeting of Leaders which has been called recently by Ban Ky moon. This has major significance because it precedes the December COP preparatory meeting for the 2015 Paris COP and will thus be a time when leaders will either show ambition – or won’t. (This September meeting had only just been announced. The Coalition has asked Oxfam to coordinate a response which includes encouraging media stunts, social media campaigning, involvement with politicians, and mobilising high-profile names to support the campaign.)

c) February 2015, a Valentine card to MPs about the things they love, picked up from their responses in a) above.

e) June 2015, a mobilisation of communities to let the new Government know how important we regard ambition on Climate Change and how essential is the Paris COP meeting for a massive turnaround of what is being done to the Earth.

4. A Question and Answer session. For your information, I asked one related to the relative importance which each organisation is giving to the reduction of CO2 emissions on the one hand and the abatement of the effects of climate change on the other. (There are some important paragraphs in the 2014 IPCC Summary Report for Policymakers (page 25) which make clear that without major emphasis on the former, attempts to cope with the effects of climate change are likely to be overtaken by the intensity and frequency of those effects.) It seems that politically and socially the abatement option is the more attractive, so we are on a hard road. Judged by this meeting and the Joy in Enough one, we have many lovely companions.

Comments on "For the Love of… Climate Coalition launch"

Reggie added another good idea :- "For the love of a decent life for our children and grandchildren and all future generations."

Sandra contributed a very inspiring line, based on Biblical themes :- "For the love of the water of life and the leaves of the trees that are for the healing of the nations."

I asked our email forum :- "Why are we acting on climate change ? For the love of... ...the whole Earth ...God's green Earth ...Green Christians ...a brighter future Do any of you have any creative suggestions about what we should use as CEL's own "strapline" ? It must start with "For the Love of..." and be relatively short." Here is one reply :- "In response ..., ultimately we act on climate change, sustainability etc. as an expression of our love for God himself; "If you love someone, you do not trash their property". However, I think that the right answer for CEL is that we act for the love of "The Kingdom of God". This is the "Gospel", the "Good News"; Jesus spoke about little else, Paul preached it, it is the main story line of the Bible and planet earth lies at the heart of God's Kingdom. Surely, CEL's mission is based on "Your Kingdom come"; serving the Kingdom, i.e. spreading the whole gospel not just part of it. Best regards Mike"

For the Love of the Future

Steph and Jim write in :- "What about: for the love of our local Parks and Open Spaces and their wildlife residents? Just because they don’t pay Council rates doesn’t mean they’re of no value!"

Westley suggests :- "For the Love of the world God gave his one and only Son"

Colin writes :- "Been pondering this and got a couple of ideas on a theme, but doesn't feel 100% right yet. I'll put them out there and see if anyone else can improve them. First one is: ... creation, people and the future. Indicates that we care both for the future ofthe natural/created world and humanity. Not quite right in that "people" are part of "creation", and "creation" might be taken the wrong way by non-Christian groups. An alternative is: ... people, planet, future. Feels better in some regards, although you want a third P if possible. I thought about "posterity" but that seems a bit pretentious!"

'for the love of' fresh air and plenty of clean water

Thanks, Phil, nice report. For the love of...the whole earth is good. Can we make our message more Christian some how?....Operation Noah has nabbed 'God's world, God's people...'. Speak has nabbed 'The world, that God so loved', Christian Aid and Tearfund are using 'neighbours'. Any ideas anyone?