A view of the CEL ecocell travel workshop, 12 Jan 2013 from Martin Davis

Martin Davis wrote this account of the ecocell meeting on Saturday:

This was the title of the the Christian Ecology Link workshop I attended today. In doing so, the Government-funded transportdirect website calculates I created 21kgs of carbon emissions on my train journey: this was, it seems, less than a quarter of what it would have been had I driven, but nearly double that of a coach passenger.

I looked these figures up after my return, having been stirred by the workshop’s presentations into taking more interest in the way in which I travel around. One of the speakers, indeed, urged us all to consider a pledge “to live within rations”.  500 kilograms a year is suggested. Only by doing so would we avoid the pitfall of “vague good intentions, such as This year I aim to be driving less, flying less, using less… All use-less!” he said.
So, I now have a strategy for action. Measure my carbon footprint, first: record car mileage, train and longer bus trips. (Air travel is out at over a kilogram every two kilometers for CO2, multiplied by about three if you take into account nitrogen oxides etc.) Secondly, live locally. Thirdly, when driving, never exceed the speed limit.There were other exhortations, but you can only take on board so many at a time, and that’s plenty for me to be going on with.  And besides, there’s the big unspoken challenge: how to avoid being Holier than thou? 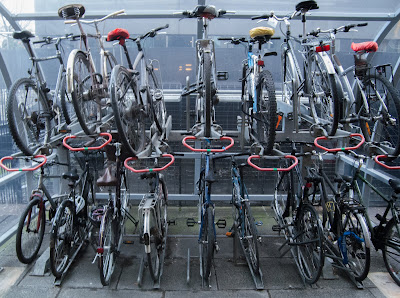 The workshop was the first meeting to be held in the newly-refurbished basement of St Aloysius’ Church, Somers Town, just behind Euston Station – where I saw an encouraging number of bikes stored, for weekday commuting.

More photo’s kindly taken by Martin can be seen here.

Next: John the Baptist and Jono Moylan: Resistance to coal in heat-afflicted Australia

Previous: Enable your old (and young) friends to get out on nature trips

Comments on "A view of the CEL ecocell travel workshop, 12 Jan 2013 from Martin Davis"

Thanks Martin. Yes - it was a very good day - and lots of positive feedback has been received so far. If anyone has any addtional feedack either about the day or the ecocell porgramme itself, please do let me know by e-mailing georgedow51@btinternet.com. Towards the end of the day Tony and I were particularly interested to hear of the challenges which are faced by several participants especially in the ongoing recording of food purchases - we are working on how to make this easier. And would of couirse also be delighted to hear from anyone who is interested in joining the ecocell programme. George

Add your own comment to "A view of the CEL ecocell travel workshop, 12 Jan 2013 from Martin Davis"

This website uses cookies to improve your experience while you navigate through the website. Out of these, the cookies that are categorized as necessary are stored on your browser as they are essential for the working of basic functionalities of the website. We also use third-party cookies that help us analyze and understand how you use this website. These cookies will be stored in your browser only with your consent. You also have the option to opt-out of these cookies. But opting out of some of these cookies may affect your browsing experience.
Necessary Always Enabled
Necessary cookies are absolutely essential for the website to function properly. These cookies ensure basic functionalities and security features of the website, anonymously.
Functional
Functional cookies help to perform certain functionalities like sharing the content of the website on social media platforms, collect feedbacks, and other third-party features.
Performance
Performance cookies are used to understand and analyze the key performance indexes of the website which helps in delivering a better user experience for the visitors.
Analytics
Analytical cookies are used to understand how visitors interact with the website. These cookies help provide information on metrics the number of visitors, bounce rate, traffic source, etc.
Advertisement
Advertisement cookies are used to provide visitors with relevant ads and marketing campaigns. These cookies track visitors across websites and collect information to provide customized ads.
Others
Other uncategorized cookies are those that are being analyzed and have not been classified into a category as yet.
SAVE & ACCEPT