Itinerant Farming to White House Arrests: a scientist’s view of the climate crisis 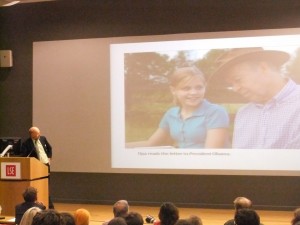 I went to James Hansen’s talk last night. Perhaps the most famous climate scientist around – I got there an hour and a half early to make sure I got in – but the 400-capacity hall was not quite full.  This says a lot about how far we still have to go.  And how few people share my idea of a celebrity.

Dr Hansen was in Europe to try to persuade the EU that it is a mistake to treat tar sands as if it is ordinary oil.  He said, ‘We know countries in the middle east can get oil out of the ground for $5 a barrel and nothing is going to stop them doing so.’  Tar sands contain huge reserves of oil which takes a lot of energy to mine and must be left in the ground.

He was good.  Lots of head stuff – last time the world was 2 degrees above pre-industrial the sea level was 6 m higher, graphs showing we have already burned more than half of the earth’s burnable carbon and how unconventional fuels cannot be burned.  This was interspersed with heart stuff – photos of his grandchildren and a story about monarch butterflies.  And his last sentence was, ‘…so……that’s my story…’ i.e. he was no professional orator.  It made me realise you don’t have to be a great orator to be inspiring, persuasive and a legend.

I learned the main reason he has retired from NASA was so he can now testify against the government.

He was full of hope and common sense.  E.g. all we need to do is to drop our global emissions by 6% annually and by the end of the Century we’ll be only a few tenths of a degree above pre-industrial.

I was disappointed in that he didn’t tell us what to do.  The question I asked: ‘Has the time come to forget about writing letters and marching and simply to fill the jails?’ got a cheer from the audience.  But unfortunately, Dr Hansen didn’t answer it at all – maybe he did not hear the question correctly, or maybe he didn’t want to get into trouble.

It was good to be there.  I can now say that I saw the architect of the fee-and-dividend initiative that saved the world.  God-willing.  God bless you, Dr Jim.

Next: CEL & Enough Food for Everyone If..

Comments on "Itinerant Farming to White House Arrests: a scientist’s view of the climate crisis"

One can get arrested with nvda without causing anyone any problem.

My own answer to Ruth’s question is a very definite no. There are plenty of other ways to get the message across that urgent action is needed on Climate Change without resorting to such activities. In many cases such as at Kingsnorth and Bishopsgate, the disruption caused to local communities and businesses was such that those events were not consistent with the command to love our neighbours as ourselves. If we want to avoid similar events in the future it is no good just hoping they won’t happen and then wringing our hands about it afterwards. The church needs to offer a "direct-action free" alternative and urge the rest of the environmental movement to join with us in putting it into practice. The local election results a couple of weeks ago in which approximately 25% of voters voted for UKIP shows how far we are from convincing our fellow citizens of the need for action to address climate change. That needs to be our priority and it will require effort in towns and villages up and down the country. Local churches have far wider coverage on the ground than any of the major environmental organisations so we are best placed to get on with the job. There has been a perceptible loss of momentum since Copenhagen. We need to rebuild that momentum in the run up to the COP Meeting in 2015. Almost every week further scientific papers are published indicating the seriousness of the situation so let's get the message out there.

Add your own comment to "Itinerant Farming to White House Arrests: a scientist’s view of the climate crisis"