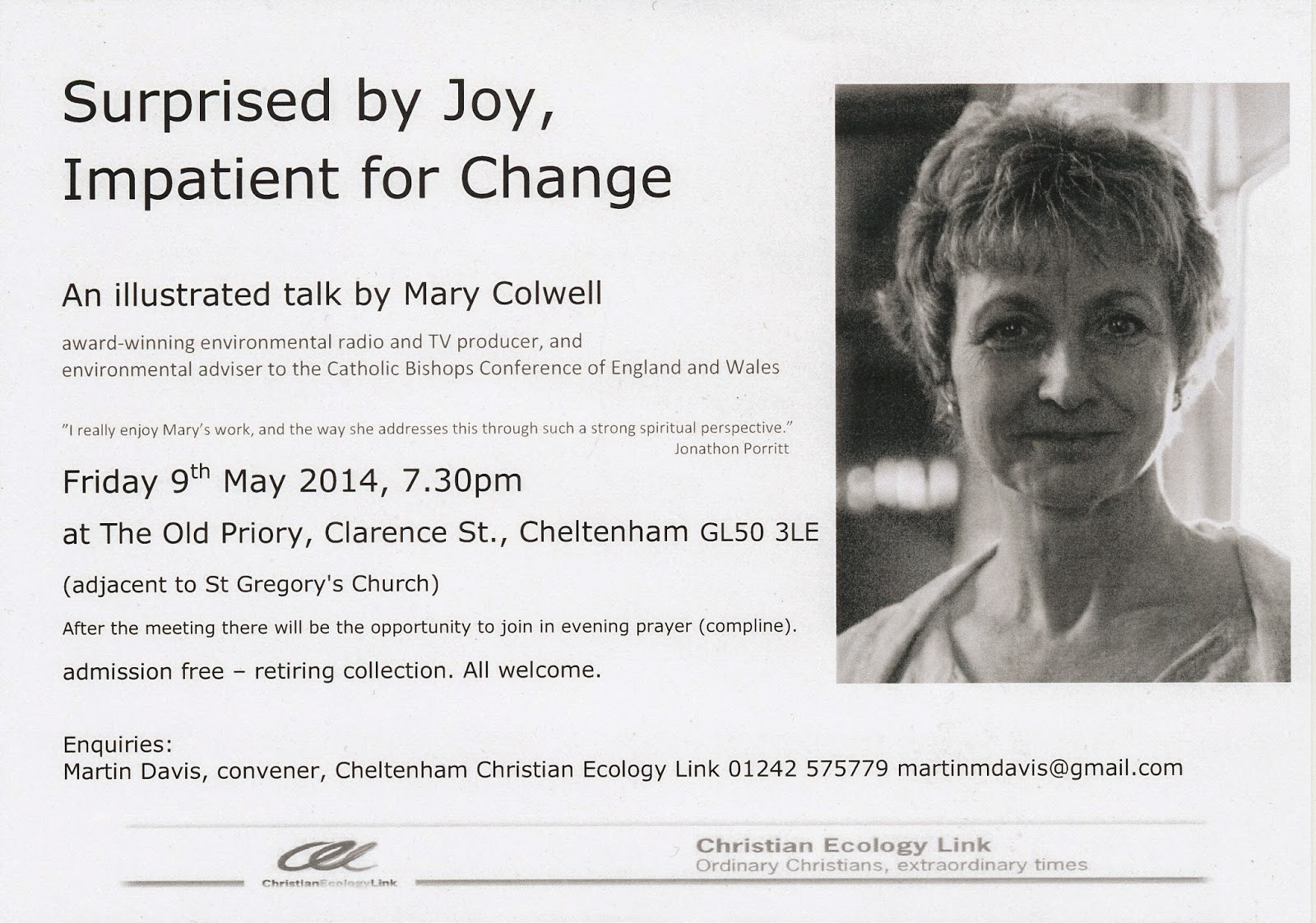 During my walking on the Jakobsweg, I read Pope Francis’ Evangelii Gaudium. I found it inspirational. The joy of the gospel, it begins, fills the hearts and lives of all who encounter Jesus.

It’s a long document – more like a book actually: but don’t let that put you off reading it. Because it’s informally written and well-translated – and full of good stuff. One passage I particularly liked was this: An authentic faith – which is never comfortable or completely personal – always involves a deep desire to change the world, to transmit values, to leave this earth somehow better that we found it. We love this magnificent planet on which God has put us, and we love the human family which dwells here, with all its tragedies and struggles, its hopes and aspirations, its strengths and weaknesses. The earth is our common home and all of us are brothers and sisters.

I was reminded of this when Mary Colwell came to Cheltenham last night, to speak at one of our regular, if infrequent, Christian Ecology Link meetings. Her title was “Surprised by Joy, Impatient for Change”. We heard more about the first part than the second, but no matter. For one evening at least it was possible to be an environmentalist and not a killjoy.

What is joy? Mary began by asking, besides being one of the fruits of the Holy Spirit. Not the same as happiness! Do animals experience joy? Hard to say, but perhaps it’s through nature alone that we can be truly surprised by joy. Sylvia Earle talks of discovering it when “dancing” deep in the oceans with an octopus: Mary herself, sitting on a Cornish beach, en-joyed a seal popping up amid the breaking waves. For her, it brought to mind the thought voiced by former slave, George Washington Carver: God speaks to us every hour about nature if we’ll only tune in.

But John Muir was the figure who dominated the talk: even among the environment-minded, he is little spoken of. Born in Scotland in 1838, one of seven children of staunchly Presbyterian parents, he moved with the family to the United States, where they set up a frontier farm. Seeing the destruction brought to the wilderness by the advance Westwards, he became its advocate, his campaigns bearing fruit within the National Parks system.

Everywhere John Muir looked, he saw God, and joy in nature motivated him to wonder – and to act, in order to protect forests, rivers and birds. He died in 1914, the same year as Martha, the very last of the passenger pigeons whose fate he so much lamented.

For Muir as for us, joy isn’t a passive emotion: it arouses a sense of injustice, and makes you want to do something: most people are on the world, Muir wrote: not in it… touching, but separate… I must get out into the mountains to learn the news.

In his “Surprised by Joy”, C.S. Lewis says, Joy is never in our power, and pleasure often is; so if, in the face of adversity, we suffer a defeat, then we can never lose faith in humanity – just pick ourselves up for the next battle.

Next: A Change in the Climate : Christiana Figueres at St Paul’s Cathedral

Previous: Help us at the CEL stall at Greenbelt 22-25 August – Kettering

Comments on "Joy into Action"