Forty three of us, including five children, enjoying the Green Christian Retreat in North Wales this June 10-12; Our third retreat at Noddfa:-  led by Keith Hebden, author of Seeking Justice The Radical Compassion of Jesus. He will be starting work as Director of the Urban Theology Unit in Sheffield in September.

Here  below, in the grand concluding activity on the Sunday,  we join with other groups and faiths around the world taking part in actions for  SacredEarth2016 on 12 June

One of Keith’s themes was ‘Homecoming’ thinking of the prodigal son returning home. He asked us in pairs to describe to each other what was ‘home’ for us, the place where we felt at peace and could relax, or felt known or accepted. This is not necessarily the same as the place we live.

We often use guilt as a motivation for trying to live sustainably, but if we appreciated the natural world as our true home, the place where we can rest and where we are welcomed and invited to celebrate, like the son coming home to his father, then we will be motivated by gratitude and love to live in step with the natural world, and delight in making a deeper connection to it.  As we come home to Creation, it will run to greet us like the father welcoming and rejoicing over his son.

Find out more about the  Song – Sing for the Climate

CR:   Keith talked a lot about being community and the importance of doing things as a community; one phrase that sticks in the mind is “There is a God-shaped space between I and Thou”. We might think we want to get away from our Christian community to focus on green issues, but it is in that community that we will find God, as in any relationship where there is respect and mutual attention. He also talked about participating in God, rather than believing in God – its not just based on rationality; we have to get involved to really experience this mystery of the divine.

RJ: .. I must buy Keith’s new book when it comes out. And that it was soooooo lovely to be with my lovely Green Christian friends again. And that wholewheat soda bread is the best type of bread and makes great sandwiches with homous and apple.

GP: Abiding memories of…….the delicious soups and bread, the younger generation, the chicken, the Saturday evening entertainment, sink taps from a bygone age of plumbing, the many and varied shapes of people’s feet, a man from near Chesterfield wearing odd socks, putting your hand out to stop a train, the trees….I could go on but not forgetting…..the people. 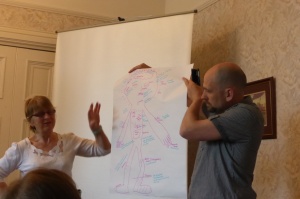 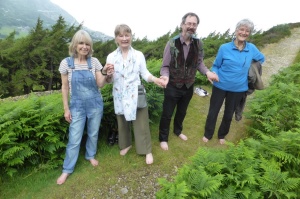 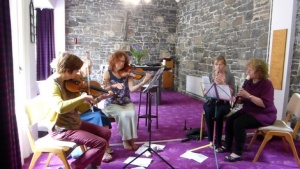 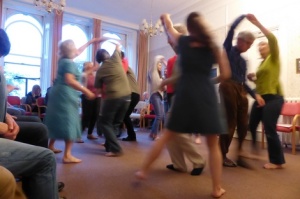 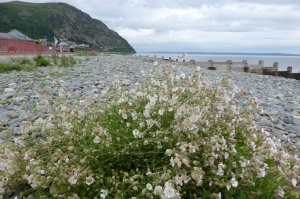 Comments on "Report on June 2016 GC Retreat at Noddfa"