Did you know that preventing further rainforest destruction and degradation is one of the most cost efficient, easiest  and VITAL things to do to to reduce greenhouse gas production: Here are some useful facts from

How bad are Bananas? – the carbon footprint of everything by Mike Berners-Lee.

Published by Profile Books in 2010
https://profilebooks.com/how-bad-are-bananas.html

Currently tropical deforestation and forest degradation account for between 10 to 17% of the world’s carbon emissions annually. (The annual percentage has gone slightly even though forests are still being destroyed because the amount of CO2 from fossil fuels and cement production is going up)  Once degraded, or turned into agriculture, cattle ranching, oil palm plantations and mining, the land emits more CO2 than it takes up. Saving rainforest and its soils is one of the easiest ways of reducing the world’s carbon footprint. So why aren’t we making more effort to save them? 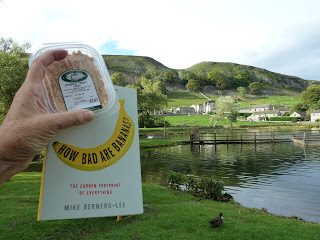 Here (quoted with his permission) are two passages from Mike Berners-Lee’s book that I like to refer to. It was written in 2010.  I asked him if he was going to produce a second edition with updated figures. He said “Yes but first  I have another book project – to be published in the new year.” He has also written a book –“The Burning Question”

Page 191-193 The Cost Efficiency of Selected Carbon-saving options
Page 154: The Carbon footprint of a Hectare of deforestation

The list I give below isn’t complete but I have included it to illustrate that it is essential to pick our battles. Some of the least cost-effective options on this list are receiving major UK government funding while some of the best-looking options haven’t had the serious attention. There could be other well-founded reasons for this, but they aren’t obvious to me.

It can be frustrating to see public money wasted on red herrings, apparently because the analysis simply hasn’t been done. Quantified carbon and cost analysis may not be the whole story, but it is an essential part of it.

#all the figures below are net costs of profits over the lifetime of the measure. They are based on a financial discount rate of 105 (see photovoltaic panels, page 133). In other word, if you are promised a saving of £1000 but have to wait a year for it, I’ve only called it £900. If you have to wait 2 years I’ve called it £810 , and so on.

Investing in offshore and onshore wind farms. Just above zero. Payback on 15 years (would be 8 years if we ignore discount rates)

Slowing down from 70mph to 60mph on the motorway. Variable, but typically cost neutral even when the driver’s time is included. No investment costs (see page 67)

Pay farmers to keep their forest via the Amazon Fund or similar.  £3.00 per ton, plus biodiversity benefits (See deforestation, page 154)

Fund family planning in the developing world..£4.00 prt tonne according to the Optimum Population Trust. See “Having a child” page 151

Upgrading loft insulation to 270mm where 50mm currently exists. £5-00 per tonne. This figure is the total cost, which is shared between government and home-owner.

Government investing 24p per unit to a feed-in tariff for micro:  wind turbines. £250 per tonne saves, assuming that this replaces electricity from coal, an ignoring the embodied energy in the panels themselves (see Wind turbine, page 146).

Government investing 36.5p per unit to a feed-in tariff for micro-photovoltaic panels £360 per tonne saved, assuming that this replaces electricity from coal, and ignoring the embodied energy in t he panels themselves (see Solar panel, page 133).

Page 154: The Carbon footprint of a Hectare of deforestation

That’s equivalent to an average car driving 700,000 miles -28 times round the world

A hectare is 100m x 100m, so there are 100 of them in a square kilometre and about 260 or them in a square mile. Globally we are cutting down or burning about 13 million hectares of rainforest per year. That’s about half the land area of the UK. The result is about 9 billion tonnes of CO2 or 17 percent of all man made emissions. 3

Most of this total (about 9 million hectares or 6 billion tonnes) involves clearing forest to make way for livestock and other agriculture. One estimate is that 20-50 percent of rainforest loss is due to cattle grazing, 35-45 percent to small holdings, 15-20 percent to intensive agriculture, 10-15 percent to logging and perhaps 5 percent due to other cause such as urbanisation, mining, roads and other infrastructure.4

Anything that increases the land we need for agriculture drives deforestation. Included in this are high-meat diets, cut flowers and biofuel crops. In Brazil, where to deforestation accounts for 70 percent of emissions, rates had been falling since 2004 until a spike in beef and soya prices brought on a further increase.

Halting deforestation is potentially one of the easiest climate-change wins, if we van only find the mechanism. Brazil has pledged to cut its levels by 80 percent over the next decade. That is a big win. The Amazon Fund5 pays farmers to hang on to their trees. It works out at just £3 per tonne of carbon saved6. What a bargain! It is also fantastic for biodiversity. The Norwegian government has pledged US$1 billion to support this, Why doesn’t the UK government get into this kind of thing instead of supporting photovoltaic panels (see page 133) at less than one-hundredth of the carbon benefit per pound invested?

Add your own comment to "Saving Rainforest and preventing Climate Catastrophe"