Green Christian members at the entrance to Downing Street

A good number of Green Christian members were able to join this march, quite a few travelling some distance to be there. A dozen of us joined the Interfaith Gathering at Westminster Synagogue which was standing room only. There were six speakers representing Judaism, Islam, Christianity and Buddhism together with Voltaire Alvarez a former co-ordinator for climate change in the Philippines.
Dr Ruth Valerio from ARocha cited an Environment Agency Report from a few years back which listed 50 things to save the planet. The second most important item on the list was a mandate to religious leaders to make this a top priority within their faiths. Describing her own faith, she talked about the Trinitarian God who is a God of relationships, which can be seen in the context of us and God, and also the myriad of inter-relationships with the natural world which we might also describe as ecosystems. Put very simply Climate Change is evidence that those relationships are going wrong and we should do everything we can to tread gently on the earth and rebuild what is broken.
Rabbi Jonathan Wittenberg talked about the Creator God and Nature, and how the desecration wrought by mankind means the earth is crying out for healing. He cited Hans Jonas’ ‘The Outcry of Mute Things’ as a revelation for our generation and more recently Pope Francis’ encyclical ‘Laudato Si’ which calls the world together with our voices raised in both joy and pain.
Voltaire Alvarez from the Philippines explained how their thousand plus islands were suffering the effects of climate change – since 2010 there had been around 25 typhoons a year – equivalent to two every month and getting so much stronger. He thanked groups worldwide for the solidarity that had been shown with the Philippines and strongly urged that the Philippino voice needed to be heard in governmental debates here in parliament and elsewhere.
After all the speakers there was  some mediation time, an Interfaith Prayer that we said together and even a discussion with our neighbours about our next personal action for Climate Change. This amazingly fitted into about 50 minutes.

We then set off to join the main march, walking first through the leafly parts of Knightbridge and Hyde Park, before joining the main march on Park Lane. It was estimated about 70,000 of us marched.
Jo Greenwood reports: The rally I thought went well. I thought the talks by the Children of Conservation group and Friends of the Earth were particularly good. The Children of Conservation group talk was simple but got the message across – that in the past nothing much has been done about Climate Change despite marches all over the world, this year that has to change. They asked everyone to sign their petition. Charlotte Church also sang a song about Climate Change and changing attitudes. 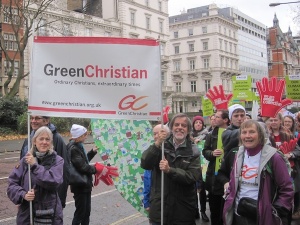 Next: Christians protest against ‘climate whitewash’