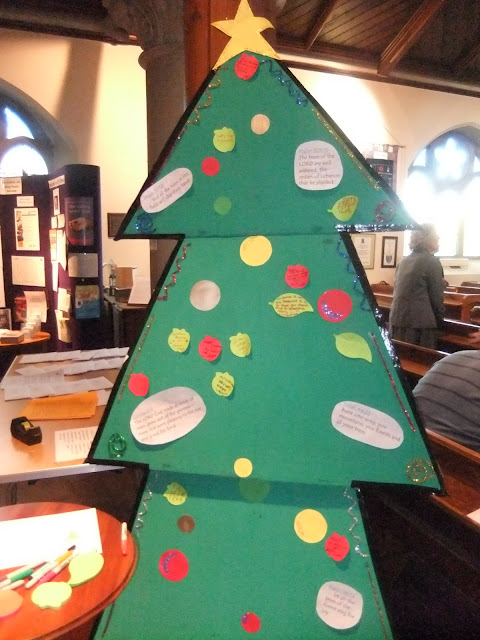 Hartley Wintney is to raise money for the 100churches Rainforest Project again this 2012 December.

This Christmas Card Tree was made from an old cardboard box and members of the congregation were invited to write their Christmas message on a “bauble” and stick it on the tree instead of buying individual cards.

Money raised was donated on line to A Rocha’s Forests programme including A Rocha Ghana. It was given as part of the “Big Give” where signed-up charities received double the donations between set dates in December. –

See the Arocha International part of the Big Give Website – In 2012 the A Rocha money is directed to Environmental Education – in countries with endangered habitat- so vital in raising awareness of the need and value of protecting habitat.

Hartely Wintney is the fourth church in CEL’s 100 churches project .

Remember we live at a time when

Under threat of extinction:-

Previous: The financial crisis and capitalism

Add your own comment to "Hartley Wintney raises money for forests"

This website uses cookies to improve your experience while you navigate through the website. Out of these, the cookies that are categorized as necessary are stored on your browser as they are essential for the working of basic functionalities of the website. We also use third-party cookies that help us analyze and understand how you use this website. These cookies will be stored in your browser only with your consent. You also have the option to opt-out of these cookies. But opting out of some of these cookies may affect your browsing experience.
Necessary Always Enabled
Necessary cookies are absolutely essential for the website to function properly. These cookies ensure basic functionalities and security features of the website, anonymously.
Functional
Functional cookies help to perform certain functionalities like sharing the content of the website on social media platforms, collect feedbacks, and other third-party features.
Performance
Performance cookies are used to understand and analyze the key performance indexes of the website which helps in delivering a better user experience for the visitors.
Analytics
Analytical cookies are used to understand how visitors interact with the website. These cookies help provide information on metrics the number of visitors, bounce rate, traffic source, etc.
Advertisement
Advertisement cookies are used to provide visitors with relevant ads and marketing campaigns. These cookies track visitors across websites and collect information to provide customized ads.
Others
Other uncategorized cookies are those that are being analyzed and have not been classified into a category as yet.
SAVE & ACCEPT